In my last post about the murder of Celestina Christmas and the story behind it, we visited Murray Street (now Grove) where Mary McNeil killed her children.

And over on the Worldwide Genealogy blog, I posted about how I tracked down the two houses, nos 16 and 17, which feature in the story. Here’s a map from 1867, showing them and the two streets nearby which still have houses from the 1850s:

The houses don’t exist any more, but as a bonus while I work on the next instalment of the story, when we return to Celestina and the murder, here are some photos I’ve taken from just round the corner from Murray Grove, which will give you an idea of what 16 and 17 might’ve looked like. The first is in Shepherdess Walk, which was then called Vaughan Terrace, and I’ve marked the stretch of houses in the photo in purple on the map above:

Here’s another, this time from Micawber St, called Edward St in the 1850s. You can see the houses are a little plainer, perhaps because they’re on a side street. I’ve marked the ones in the photo in yellow on the map: 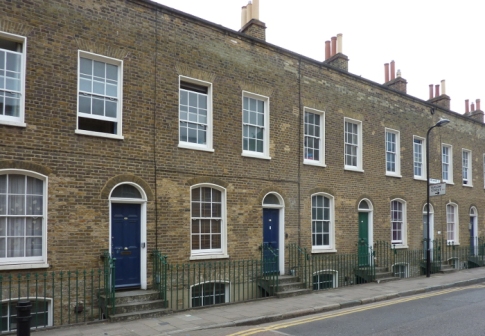 I hope this gives you an idea of the sort of houses Celestina Sommer would’ve known in Murray Grove in 1856. You can compare them to her home in Linton St here.

* Picture credits:
Kelly’s 1857 map of Murray St and the surrounding area: Mapco
Photographs of Shepherdess Walk and Micawber St: © Frances Owen and A Rebel Hand, 2015. If anyone wants to re-use them that’s fine, if you ask me first! And attribute it, with a link, please. See copyright policy in the right-hand side bar

A Rebel Hand is: about Nicholas Delaney, Irish rebel of 1798, transported as a convict to New South Wales, roadbuilder, innkeeper and farmer. My great-great-great grandfather. Other ancestors transported to Australia, like Sarah Marshall, John Simpson and James Thomas Richards, pop up as well. This blog's also about the historical background to their lives, in England, Ireland, and Australia. My respectable Welsh ancestors sometimes get a look in.
View all posts by rebelhand →
This entry was posted in Celestina and tagged #victorianmurder, Celestina, Celestina Sommer, Christmas, London, maps, Murder. Bookmark the permalink.

11 Responses to A Christmas bonus