In the last episode, Celestina Elizabeth Christmas’s sisters got married. Celestina was still living with her parents and younger brother Alfred at their house in King Square in Finsbury, north London.

In 1852, at 24, she was still marriageable, but there was the small problem of her illegitimate daughter, also called Celestina, who was being looked after by my 3x great-grandmother, Julia Harrington, in Hackney. 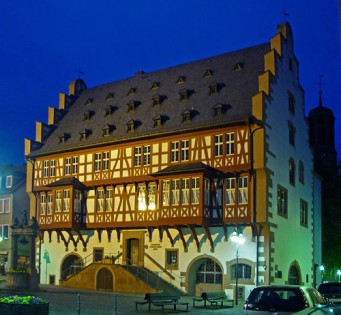 What was to be done to marry her off? They’d probably either hope that a man would fall for her and marry her despite the baby, or find someone complaisant enough to take on soiled goods in exchange for a good dowry or a hand-up in his professional life.

Celestina was pretty. Short and slim (‘of spare form’), with fair skin and hair, she looked much younger than she was. She was well-educated, could sing and play the piano, seemed docile, and was generally good wife material – except for her little indiscretion.

It’s reasonable to guess that her parents didn’t plan to trick a suitor by hiding the child forever. Little Celestina was her mother’s liability, and the un-named father hadn’t taken responsibility for the results of his dalliance, so Celestina Elizabeth’s beau would have to know. And she’d already proved she was fertile. Her future husband could confidently expect sons in good time. 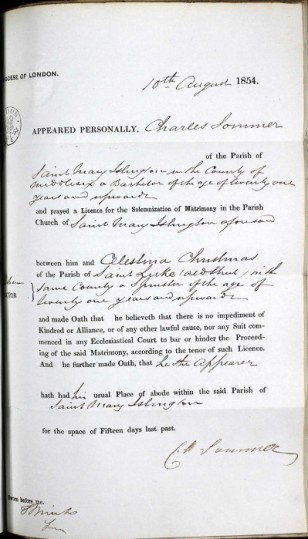 Licence for Celestina and Charles to marry *

What luck, then, that her sister Elizabeth Jane had just married a German engraver who had a friend, Charles Sommer, another engraver, who’d settled nearby in the parish of St Mary, Islington.

I’ve found no evidence of whether Charles fell for the older Celestina, or whether her father made him a very good offer. All the records show is that on 10 August, 1854, he got permission to marry her by licence at his local church, St Mary’s.

That’s interesting for two reasons: they were to be married by licence, not banns, and at his church, not the bride’s. Banns were a declaration of a couple’s intention to marry, and had to be read out three times at both bride and groom’s church in the three months before the wedding.

Licences were expensive, and so had social cachet, but they were also a way of getting married in a hurry, and without the couple’s congregations necessarily knowing in advance.

Did paterfamilias William Christmas choose a marriage by banns to show off his wealth? Or did he prefer to avoid making the marriage public knowledge, in case someone caused trouble, or blurted out what should stay unsaid? And was that why the wedding took place at Charles’s local church and not the Christmases’, St Luke’s? What do you think?

The marriage took place two days later and the couple moved into their marital home, 18 Linton St in Islington. You may have noticed that Charles gave this street as his address on the marriage register, above.

No 18 has since been demolished, but the surviving buildings are neat, classical little houses with two storeys and a basement, just right for a young middle-class couple starting married life. Current prices for a house there now are either side of one and a half million pounds. But that’s London prices for you.

Either Charles Sommer was doing very well as an engraver, or William Christmas helped set his embarrassing daughter up in a respectable home.

So who was this compliant or complacent husband?

Aliens register for the ship Ocean *

Charles (or Karl) Sommer had come to London from Hanau in the German state of Hesse in 1849. He’s listed among the ‘Aliens’ in the ship Ocean, sailing from Rotterdam. Next to him on the list is another man from Hanau – Charles Grobe, who was to marry Elizabeth Jane Christmas.

Both listed their profession as ‘graveur’ – engraver. Maybe they’d been friends in Hanau and decided to try their luck in London together; perhaps they met on the ship. At any rate, the two Charleses would end up marrying into the same family.

Hanau’s silverware industry was experiencing a surge at the time. It was later to become notorious for producing antique style silver, with dubious marks, but when the Charleses left this trade hadn’t begun.

Wondering why the two young men left, I thought that they might have found the silver trade overcrowded. Another possibility is that they had to flee after the crushing of the Revolution of 1848.

By the time of the 1851 census, Charles Sommer was living in a lodging house at 11 President Street East, Finsbury, just round the corner from the Christmas family home in King Square.

The census (see below) shows him as ‘head’ of the household. Perhaps he was responsible for paying Frau von Schiller the rent.

Is it too much to imagine that he chose this place not just because he was living with other German craftsmen, but also because they – or because Celestina – lived there?

Charles (Carl von) Sommer in the 1851 census, two-thirds of the way down *

Charles/Carl seems to have wanted to make himself appear grander by adding a ‘von’ to his name. Or it could have been the census enumerator’s mistake. He’s described as a die sinker, a skill similar to an engraver’s. Maybe he took what metalwork he could get.

I hope I’ve drawn you a well-rounded picture of Charles and Celestina, Mr and Mrs Sommer. Newly married, snug in a well-furnished (more about that later), neat house in Linton St. And so they lived happily ever…

Well, no. Of course not. And I know I’ve made you wait for the gory stuff. Next time, I promise. So as a reward for being so patient, here’s a taster.

A Rebel Hand is: about Nicholas Delaney, Irish rebel of 1798, transported as a convict to New South Wales, roadbuilder, innkeeper and farmer. My great-great-great grandfather. Other ancestors transported to Australia, like Sarah Marshall, John Simpson and James Thomas Richards, pop up as well. This blog's also about the historical background to their lives, in England, Ireland, and Australia. My respectable Welsh ancestors sometimes get a look in.
View all posts by rebelhand →
This entry was posted in Genealogy, London and tagged #victorianmurder, Celestina, Celestina Sommer, Christmas, family history, genealogy, Harrington, Murder. Bookmark the permalink.