As Celestina Sommer and two other equally notorious women waited for death in Newgate Prison‘s condemned cell in April 1856, two sets of people got busy. Some were gathering evidence and support to petition for her to be reprieved. I’ll come back to this part of the story soon. 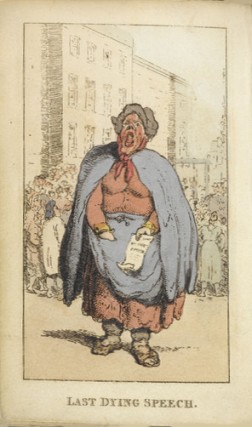 Others, though, would have been delighted to see her hang, and not on moral grounds. These were the printers and sellers of broadsides, the cheaply printed, one-page scandal sheets sold on the streets. Part titillation, part shocker, they were the nineteenth century equivalent of our red-top tabloid newspapers.

Their speciality was printing (often made up) last words and confessions of criminals to be sold on the day they were hung to the crowds gathered to watch the execution – or to those who hadn’t been lucky enough to get to the show.

Broadsides also contained details of the trials of murders (almost always ‘horrid’, ‘inhuman’, ‘cruel’ or ‘barbarous’) and/or a ‘copy of verses’ detailing the crime, the lamentation of the criminal, or a lesson by example to young men, maidens or other susceptible groups.

Execution of the Mannings, with ‘inserted’ woman *

While the broadside printers were, no doubt, getting the stock woodcut of a hanging ready for their ‘dying confession of the Islington murderess’ edition, they were canny enough to gather in a few pennies with what they had already. So in this post I’m moving from newspapers and official reports to, quite literally, the word on the street about Celestina Sommer.

I’ve found three different broadsides with versions of Celestina’s murder of her daughter.

The first is a retelling in verse of the details publicly known from her trials, plus an invented judge’s pronouncement and a stock warning to ‘young females’ to remain virtuous. Here are some extracts, keeping the original spelling and punctuation as far as possible. The illustration has nothing to do with the story; it’s probably just to use up space. You can see the original here.

‘A warning take by my sad fate,
In Newgate Cell I now do lie,
For murdering of my own dear child,
My time is short I soon must die
My guilty heart can take no rest,
That deed of blood still in my mind,
How could I kill me daughter dear,
Who never spoke one word unkind

‘But guilt and fear it tempted me.
To murder and conceal the same,
I thought I would be free from her,
And no one then would know my shame…

‘I’m frighted at this dismal place,
Oh mother dear why bring me here,
I will not harm you I did say,
Come on my dear you need not fear.
I took her to the cellar there,
The child all trembling looked around,
I thought no one this deed would see,
I thought her dead upon the ground,

‘Oh mother dear don’t murder me,
Oh let me go I’ll cry no more,
I cut her throat from ear to ear,
I left her weltering in her gore
My gown with blood was sprinkled o’er
I took and put another on,
I washed myself and then did wait,
Until my husband did return…

‘They searched the cellar, there they found
Her lifeless body lying there,
Enough to melt a heart of stone,
For who could fail to shed a tear,
I taken was, to trial sent,
The judge pronounced my dreadful doom,
Celestia Somner you must die,
And in the midst of youth and bloom…

‘Now all young females standing round,
Let virtue guide you on your way
O think upon her awfull death,
And from good actions never stray,
But oh! how soon you might be caught
If tempted to commit that sin,
Which was the cause of her downfall
How happy she might still have been.’ 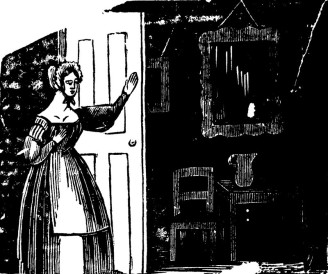 Next is a more flowery yet lurid version, again told from the viewpoint of ‘Celestia’. All three broadsides mis-spell her name in the same way, which suggests that they got their copy from the same source – or copied the first sheet to be published. The illustration is probably one used for various broadsides. The metre suggests that it may have been written to be sung to a popular tune. Here are some of the verses:

‘You tender parents list to me,
High and low of all degree,
Oh what a dreadful sight to see,
A female in her bloom,
Condemned to die, on a tree so high,
For killing of her darling child,
Who in her murderer’s face did smile
And in a very little while,
The gallows is my doom.

‘Celestia Somner is my name,
Borne down with sorrow grief & shame
I do confess I was to blame
My daughter dear to kill,
That lovely child did sweetly smile,
And said as she beheld the knife,
Upon that sad and fatal night.
Mother dear don’t take my life,
My innocent blood don’t spill, 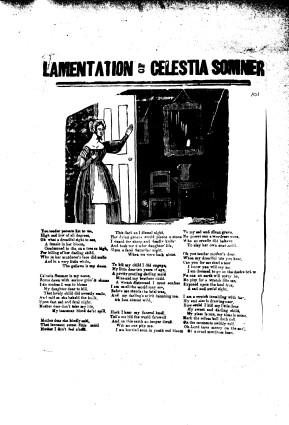 ‘Mother dear she kindly said,
That innocent sweet little maid
Mother I don’t feel afraid.
This dark and dismal night.
Her dying groans would pierce a stone
I seized the sharp and deadly knife
And took my tender daughter’s life,
Upon a fateful Saturday night
When we were both alone.

‘To kill my child I did engage,
My little dear ten years of age,
A pretty pratling darling maid
Mine and my brother’s child.
A wretch distressed I must confess
I am as all the world may see,
Before me stands the fatal tree,
And my darling’s spirit haunting me.
Oh I am almost wild…

‘Oh you tender mother’s dear,
When my dreadful fate you hear,
Can you for me shed a tear
I know you will say no.
I am doomed to go to the shades below
No one on earth will sorry be,
No pity for a wretch like me,
Exposed upon the fatal tree,
A sad and awful sight.

‘I am a wretch trembling with fear,
My end alas is drawing near,
How could I kill my little dear,
My sweet and darling child,
My glass is run, my time has come,
Mark the solemn bell doth toll,
On the moments swiftly roll.
Oh Lord have mercy on the soul
Of a cruel murderess base.’

You’ll notice that the balladeer says that little Celestina was ‘mine and my brother’s child’. Extra scandal, revealed at the second trial at Clerkenwell Police Court. 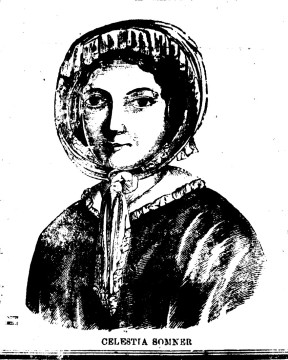 The third broadside is my favourite, so I’ve saved it till last. I like it because it’s got the nearest we’ll ever come to a portrait of Celestina Sommer (as far as I can tell), even though it may not actually be of her.

What we know about Celestina’s appearance is that she was very small and looked like a young girl; she was fair-skinned and pretty; her hair, ‘somewhat inclining to red‘, was ‘tastefully banded over her ears‘ (perhaps as in the 1850s photographs here); she dressed fashionably, as suited her position in society.

I also like the way this broadside combines a copy of verses, a picture, and a reprint of the newspaper reports about Celestina’s trial. Here are some of the verses, which were to be sung to the tune of Just before the Battle, an American Civil War song which had become popular in Britain. If you fancy a sing-song, there are some versions of it here. The online image is badly distorted, but here’s my best shot:

Full Particulars of the Trial & Sentence of Celestia Somner

‘Oh list you dear and tender mothers,
Old and young of each degree
Of dreadful murders here’s another,
The Islington tragedy.
There lived a wretch Celestia Somner,
A monster in a human shape,
Her mind was harder far than Iron,
The same would make each heart to ache.

Chorus
‘Oh the cruel murdering mother,
How could she her offspring slay.
She bore a child by her own brother,
And took the Darlings life away.

‘Cruel base and wicked mother.
Her own offsprings blood did spill,
Without a cause and without reason
Her dear child the monster killed,
Seventeen wounds she had inflicted,
What a sight for to behold,
Little poor Celestia Christmas,
Who was scarcely ten years old. 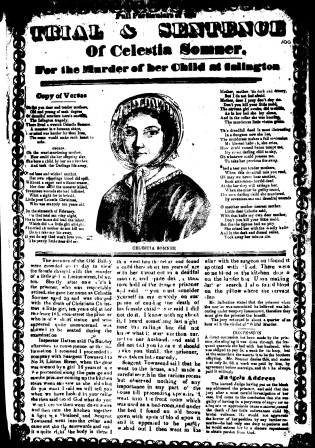 ‘On the sixteenth of February.
On that fatal saturday night,
She to her home did lead the infant,
Which did the little girl affright.
She cried oh mother do not kill me
Do not take my life away,
If you do my God won’t love you.
The pretty little dear did say…

‘This dreadfull deed is most distressing
In a dungeon now she lies,
The murderess makes a full confession
My blessed baby oh, she cries.
How could cursed Satan tempt me,
My sweet darling child to slay,
Oh whatever could possess me,
To take her precious life away…

‘O mother mother dearest mother.
Little dear Celistia said,
With that knife my own dear mother,
Don’t you kill your little maid.
But the tigress had no pity,
She seized her with the deadly knife
And in the dark and dismal cellar,
Took away her infants life.’

I hope this post has given you a taste of how the non-newspaper readers might have got their information about Celestina Sommer’s trial and sentence. Not forgetting word of mouth, the oldest and (until recently) quickest way to find out the news.

Next time: will Celestina hang?

A Rebel Hand is: about Nicholas Delaney, Irish rebel of 1798, transported as a convict to New South Wales, roadbuilder, innkeeper and farmer. My great-great-great grandfather. Other ancestors transported to Australia, like Sarah Marshall, John Simpson and James Thomas Richards, pop up as well. This blog's also about the historical background to their lives, in England, Ireland, and Australia. My respectable Welsh ancestors sometimes get a look in.
View all posts by rebelhand →
This entry was posted in Nicholas Delaney. Bookmark the permalink.

7 Responses to Broadside ballads about Celestina: a Christmas tale pt 19