Deep down in Deptford (and thumbs up for archives)

Deep into Deptford’s history, that is, looking for secrets in the streets. And possibly finding my great-great-great-great grandparents – how exciting!

Today, June 9th, is International Archives Day and I’m hugely grateful to all the archivists and the archives, small and local or huge and national, that have helped me in my hunt for my ancestors and the world they lived in. From the post office in Hartley, NSW, to libraries in Counties Wicklow and Wexford, up to national centres in Australia, Ireland and London, they have all given me and my mother huge amounts of information. Thank you to all.

This week I went back to the London Metropolitan Archives, where I recently learned so much about researching London ancestors. I wanted to get a History Card, which will let me access original material (as well as their digital database). I also had a tour of the research resources there – indexes, files, other records, maps, books. I was especially excited to see maps I wrote about last time – looking at them in real life will be so much easier and more satisfying than scrolling around small images on a screen.

If you can’t get to London, do look at the LMA site and see what research you can do online.

I had some spare time so I decided to do some more searching for my Thames waterman convict ancestor, James Thomas Richards. I knew he had been baptised in the church of St Paul, Deptford (now in south-east London, then in Kent) in May 1815. So with LMA’s parish records I was able to see his certificate of baptism, confirm his parents’ names and find out that they were living in Grove Street, a cluster of houses running almost north to south near the docks, at the time.

Working backwards through his parents’ marriage in 1807 I found his father’s (another James Thomas) baptism in 1787, again from Grove Street, and the names of the first James’s mother and father – Betty and William. Convict James’s mother was Ann Wicking and she was born, as far as I can see, in 1786 to Anna and William.

Now of course I need to double-check everything, but this is hugely exciting for me – it’s the first time I’ve traced an ancestor back six generations before mine. And being able to see where they lived is thrilling, too.

The secret history of a Deptford street

That evening, there was another wonderful surprise – a new BBC TV series, The Secret History of Our Streets, which started with an look at… yes, Deptford. It takes six streets which feature on the famous poverty maps compiled by Charles Booth and looks at the changes which have taken place since they were published in 1889 – 1891. 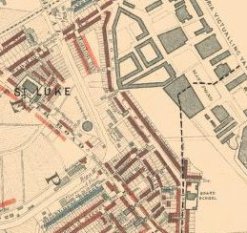 This episode focused on Deptford High Street and the families who lived and worked in the area, many of whom lost their homes in the slum clearances of the 1960s. Sometimes controversial, always fascinating, it combined social history with family history and I’m looking forward to the rest of the series.

This isn’t a television review, so I’ll leave it to other people (see below) to comment. But the biggest excitement for me was listening to people who lived only streets away from where James Thomas Richards came from – people whose families (the Prices and Ovenells, for instance) had lived in the same place, often in the same houses, for generations.

Perhaps some of my own distant cousins were in the crowded market scenes seen on old film – or on the 2012 footage!

Which are your favourite archives – or archivists?

Here are some comments on The Secret History of Our Streets: from the BBC blog, the Guardian, the Telegraph, Time Out (naughty words alert), British & Irish Genealogy and bloggers The Deptford Dame and Crosswhatfields?

Deptford Miscellany has a great blogroll for SE8.

The Naval Dockyards Society is campaigning to make sure that developers do not destroy the character of historic Deptford.

Old Deptford History is exactly what it says.

Edward Walford‘s 1878 look at the history of Deptford

If you’ve got Kent ancestors, here’s a useful genealogy resource.

Caroline’s Miscellany has lively posts about Deptford then and now

And there’s a guest post on this blog about the importance of archives for family and local historians.

A Rebel Hand is: about Nicholas Delaney, Irish rebel of 1798, transported as a convict to New South Wales, roadbuilder, innkeeper and farmer. My great-great-great grandfather. Other ancestors transported to Australia, like Sarah Marshall, John Simpson and James Thomas Richards, pop up as well. This blog's also about the historical background to their lives, in England, Ireland, and Australia. My respectable Welsh ancestors sometimes get a look in.
View all posts by rebelhand →
This entry was posted in Australia, Convicts, Genealogy and tagged Archives, Deptford, Grove Street, James Thomas Richards, London, London Metropolitan Archives, The Secret History of our Streets. Bookmark the permalink.