In my spare time (what’s that?) when I’m not climbing around the family tree, what do I get up to?

Recently, it’s been a creative writing project, a collaboration between Kensington Palace and Kensington Central Library.

The idea was to write a piece (short story, poem, whatever took our fancy) inspired by the palace or its grounds.

I roamed around the palace for an afternoon and became fascinated by the trompe l’œil portraits of courtiers and servants painted on the Grand Staircase by William Kent in 1727.

The story of Peter the Wild Boy especially fired my imagination. But how to get into it, and in fewer than 5,000 words?

I started by trying to see it from his point of view, but there was a problem. Peter couldn’t speak. OK, what about his tutor, then, Dr John Arbuthnot (1667 – 1735)? He was a well-known writer and satirist as well as being a medical man. An interesting person.

But the more I thought, the more I liked the idea of writing the story from the doctor’s wife’s point of view. Very little is known about Margaret Wemyss and that gave me a certain amount of freedom.

The research took up a lot of time – I wanted to get inside the place and time to write in a way that was honest but accessible. 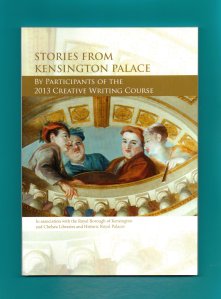 Front cover of the book

I won’t go into the details of the writing process here, but thirteen of us wrote short stories, poems and reflections all with a link to Kensington Palace. After being edited by author and playwright Tamara Pollock, our pieces were published in a beautifully-designed anthology in May. The local press reported the book launch, which was an added bonus. From our first meeting to having the book in our hands it was a rush, but we did it and I met some great people and learned a lot about writing fiction.

The whole experience gave me the appetite to take on a longer story. That’s why I’ve started another blog, which I’ll dip into now and again to talk about my experience of researching and writing historical fiction. Drop in and say hello!

5 Responses to Other projects