We’ve seen why this day is the bicentenary – it’s because this is when Nicholas Delaney and his convict road gang finished building Mrs Macquarie’s Road and delighted her husband, New South Wales Governor Lachlan Macquarie.

A small part of Nicholas’s original road can still be seen, two centuries later, at the Macquarie Culvert in the Botanic Garden. 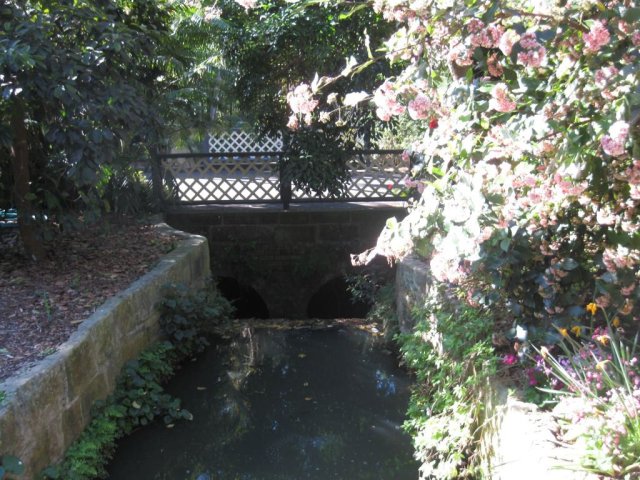 Nicholas Delaney was the overseer of a gang of labourers working on building roads for Lachlan Macquarie. The Governor’s mission in his early years was to impose order and morals on a colony which had only just experienced its first and only successful military coup, the Rum Rebellion. Part of this involved tidying up Sydney.

He set out to claim back the Domain, the Government House land which included the present Domain and all the area up to Bennelong Point and Mrs Macquarie’s Point.

The Domain, Sydney, from the air

Macquarie, a religious man, had orders from London to reform public morals. Over the years the remoter areas of the Domain had become useful territory for thieves and prostitutes. The seclusion suited hiding stolen goods and meetings of, well, various kinds. The Domain needed a good clean-up.

He enclosed the area with a stone wall and wooden fences. In 1815 he posted constables to lurk inside and arrest anyone who broke in. Three men who were caught there that April – one of them was suspected of dealing in stolen goods and keeping a ‘disorderly house’ – were flogged.

And he decided to reclaim it as a place of beauty and a delight for his beloved wife, Elizabeth. 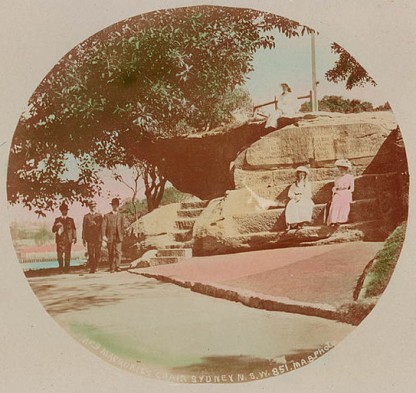 She was the one who planned a new route around the eastern part of the Domain, which was to be named after her – Mrs Macquarie’s Road. At the northern tip of the new road a large rock was carved into a seat for her – called, of course, Mrs Macquarie’s Chair – and it’s said she loved to go there by foot or carriage and watch the ships sailing in from the other side of the world.

I wonder if she saw the convict transports arriving which carried two more of my ancestors, Sarah Marshall on the Friendship and John Simpson on Ocean II, in January 1818?

It’s likely that Mrs Macquarie’s Chair was carved by Nicholas’s road gang, but I haven’t found any proof of that. On one side a stone carver has inscribed the date when Nicholas and his gang finished the road, and that, together with Lachlan Macquarie’s journal, is where the date of 13 June, 2016, the Botanic Garden’s 200th birthday, comes from.

It’s still a popular place for sightseeing, and it’s where Delaneys are gathering today to celebrate Nicholas’s achievement. A cannon will be fired to mark the historic moment at one o’clock when the men downed tools and Nicholas gave the Governor the good news.

There’s some more happy news just in time for the 200th birthday party – a controversial $130 million plan to redevelop the Royal Botanic Garden and Domain has been put on hold, the Sydney Morning Herald reports.

I mentioned how canny Nicholas had been to finish Mrs Macquarie’s Road on Mrs Macquarie’s birthday (getting five gallons of spirits as a reward). It seems his announcement of the road’s completion was pretty canny, too.

I found this story in the Sydney Gazette and New South Wales Advertiser of Saturday, 15 June, 1816: 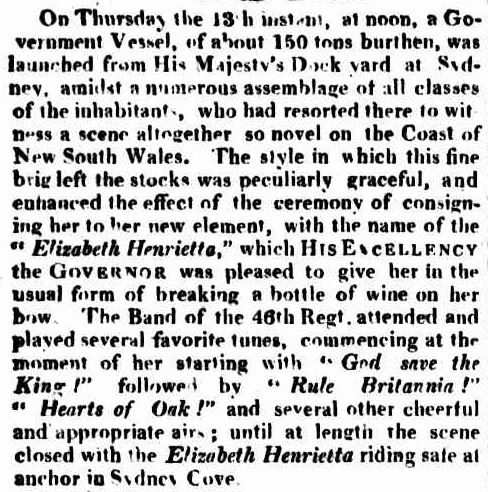 Governor Macquarie had launched a ‘fine brig’ named after his wife, Elizabeth Henrietta, at noon that day – another birthday present for her. Exactly an hour later, overseer Delaney added his good news about the road gang’s birthday gift. Isn’t that good timing? I have to admire my 3x great grandfather for his forward planning.

So here’s wishing the Botanic Garden another 200 years, and here’s to Nicholas and his descendants celebrating his achievement today!

A Rebel Hand is: about Nicholas Delaney, Irish rebel of 1798, transported as a convict to New South Wales, roadbuilder, innkeeper and farmer. My great-great-great grandfather. Other ancestors transported to Australia, like Sarah Marshall, John Simpson and James Thomas Richards, pop up as well. This blog's also about the historical background to their lives, in England, Ireland, and Australia. My respectable Welsh ancestors sometimes get a look in.
View all posts by rebelhand →
This entry was posted in A Rebel Hand, Australia and tagged #Garden200, Convict, Delaney, Heritage, history, Macquarie, Nicholas Delaney, Royal Botanic Garden, Royal Botanic Garden Sydney, Sydney. Bookmark the permalink.

1 Response to The Royal Botanic Garden, Sydney, is 200 years old!