Celestina Sommer had been sentenced to death for the murder of her daughter, Celestina Christmas. On Thursday, 10 April, 1856, she was taken back to Newgate Prison, which was used only for prisoners awaiting trial, execution or transportation.

At the top of this page from the returns of the Proceedings of the Old Bailey are the only two women and the only two death sentences – Celestina’s, and that of Elizabeth Ann Harris, who killed two of her own children. This wasn’t to be the last time their names were linked.

Here’s the printed version, with Elizabeth Harris and Celestina at the top again, plus some extra information, including the costs of the prosecution (£31.4.6d, in Celestina’s case), the number of witnesses (11), whether the defendant could read or write, and the details of their offence.

Celestina was taken straight from her trial at the Old Bailey back to Newgate Prison, as Elizabeth (who was tried the day before, 9 April) had been. There they were held in ‘separate rooms on the female side of the prison’, most newspapers reported. The Bath Chronicle and Weekly Gazette, though, had them both put in ‘the condemned cell’, but this could just have been incorrect information.

The Morning Chronicle, a London newspaper which had employed writers such as Charles Dickens, Henry Mayhew, William Hazlitt and John Stuart Mill, elaborated on the two women’s living conditions:

The turnkey and the woman who sat up at night would presumably have been there to make sure that they didn’t ‘cheat the gallows’ and kill themselves. Still, this description paints a picture of humane treatment which contrasts strongly with conditions for the prisoners waiting for trial or transportation as opposed to death.

Celestina and Elizabeth’s spiritual wellbeing was also looked after. The Chronicle continued:

John Davis, the Ordinary (chaplain) of Newgate, had many duties, including, not surprisingly, providing condemned prisoners with spiritual care – or at least those who were Anglicans. He also conducted the services in the chapel, and attended prisoners on the scaffold.

Catherine Frazer, the ‘benevolent lady’, was a former colleague of Elizabeth Fry (who died in 1845) and a long-standing member of the British Ladies’ Society for Female Prisoners. As well as visiting prisoners, she occasionally petitioned for mercy in cases which she thought deserving. 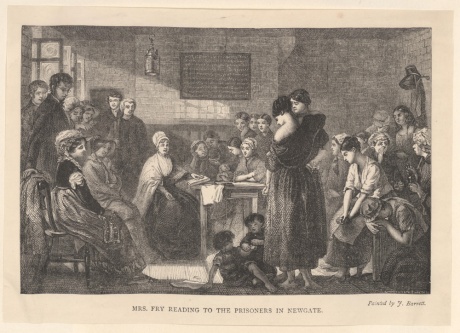 Elizabeth Fry had been visiting women in Newgate and, later, other prisons since 1813 and had made many improvements to their lives. The engraving shown here, produced in the 1860s but purporting to show her reading to prisoners in 1816, looks at first fairly sentimentalised. But not all the women are listening with regret and humility; some are hiding playing cards or bottles of booze. There’s a great post which discusses this image, and the issues of women prisoners and prison reform, here.

Whether or not Celestina had been affected by Catherine Frazer’s ‘religious exhortations’, her mental state was bad, as the Taunton Courier reported:

I have to feel sorry for Elizabeth Harris, racked by guilt, sentenced to die, and about to have her new baby taken from her.

Celestina, meanwhile, appeared to be stupefied. Other reports, though have something to say about her thoughts at the time. Here’s the Sheffield Daily Telegraph:

Even after her trial and the guilty verdict and the sentence of death she was still clinging onto her hope of being set free after a few months in an asylum – a belief which may have been one of the reasons she committed the murder in the first place.

But the prison authorities, and their medical officer, weren’t convinced that this was a sign of her being ‘in any way deranged’. Things looked bad for Celestina.

Murderers were usually hung on a Monday, and two Sundays had to pass between sentence and death, so her execution was ‘definitely fixed’ for 28 April, the Illustrated Times reported. That gave her 18 days left to live after her trial.

Unless… As many of the papers pointed out, it had been many years since a woman had been hanged at Newgate. She was Martha Browning, who murdered her mistress, Elizabeth Mundell, for a £5 note – which turned out to be a fake,  a ‘flash’ Bank of Elegance note used in advertising. Martha was executed in January 1846, just over ten years earlier.

So hanging a woman – two women, in fact, with Elizabeth Harris also sentenced to death – outside Newgate Prison would be something of a novelty. It would excite a great deal of interest, not least from people opposed to public executions, or to the death sentence itself. And hanging women was considered distasteful to even those who could accept the public hanging of men.

And so, the Chronicle said on 14 April,

Who was involved in trying to get Celestina and Elizabeth’s death sentences commuted? Once again, Quaker women were involved. Catherine Frazer played her part, as the Illustrated Times reported:

A cynic might think that it wasn’t very surprising that the woman were ‘anxious… to obtain pardon’. But after decades of prison visiting, Miss Frazer could probably tell when her audience was faking.

Maria Allen, another Quaker, sent a petition to the Home Office from Wantage on behalf of Elizabeth and Celestina. George Gray, also a Friend, wrote from Glasgow. And the ‘ladies’ of Stockton-on-Tees petitioned, saying that they couldn’t argue for commutation for the child-killers except from the women’s ‘low moral sense and slight feeling of moral accountability’, but added their arguments against all capital punishment.

As the Dorset County Chronicle reported on 24 April:

And on 26 April, the Illustrated Times told its readers:

This Mr Humphreys was probably William Corne Humphreys, whose office was near the Old Bailey in Newgate Street. He doesn’t seem to have been mentioned before in the documents regarding her case.

Celestina’s repeated story that she killed her daughter because her husband Charles treated her badly ‘on account of the child’ and she thought he’d be kinder to her if she ‘destroy[ed] it’ is chilling. Though whether it was what she really believed is anyone’s guess.

There were some other sinister reports in the papers. Here’s the Morning Chronicle:

Presumably this refers to Celestina’s assertion that her brother was the father, though I can’t help wishing that it had been more ‘necessary more particularly to allude to’ it more specifically.

But back to the petitions. The Illustrated Times must have gone to press before the next important development in Celestina’s story. By Friday, 26 April, the papers were reporting that on the afternoon of Tuesday 22 that the Sheriffs of Newgate, who set the dates for condemned prisoners’ executions, ‘received information from the Secretary of State for the Home Department that Her Majesty has been graciously pleased to grant a respite during Royal pleasure to the two wretched women…’

In other accounts, Sir George Grey, the Home Secretary, told Mr Wetherhead, Governor of Newgate, that the two women’s death sentences were to be respited. In all events, the Sheriffs and John Davis, the Ordinary, went to their cells and told them the news. The Huddersfield Chronicle says that they, especially Elizabeth Ann Harris, ‘received the tidings with earnest thankfulness’. As well they might. Celestina’s lack of enthusiasm, given her belief that she wouldn’t hang, seems odd. Perhaps it’s an indication of her state of mind.

By the 28th, the newspapers added that the ‘wretched women’ were to be transported for life.

As you might expect, there were still to be more twists in the tale…

Further reading:
A Concise View of the Origin and Progress of the British Ladies’ Society for Promoting the Reformation of Female Prisoners, downloadable ebook
Victorians Against the Gallows, James Gregory, 2012

A Rebel Hand is: about Nicholas Delaney, Irish rebel of 1798, transported as a convict to New South Wales, roadbuilder, innkeeper and farmer. My great-great-great grandfather. Other ancestors transported to Australia, like Sarah Marshall, John Simpson and James Thomas Richards, pop up as well. This blog's also about the historical background to their lives, in England, Ireland, and Australia. My respectable Welsh ancestors sometimes get a look in.
View all posts by rebelhand →
This entry was posted in Celestina and tagged #victorianmurder, Celestina, Celestina Sommer, Christmas, crime, death, Murder, Newgate, Somner. Bookmark the permalink.

6 Responses to Will Celestina hang? A Christmas tale pt 20