The murder of Celestina Christmas: a Christmas tale pt 8

A little girl’s body, her throat cut, found in a cellar in respectable Linton Street, Finsbury. Readers of the Standard on 19 February, 1856, would already have an idea of who might have murdered her, as I wrote about in my last post: the respectably-dressed, short, young married couple who lived at the murder scene: Charles and Celestina Sommer.

The newspaper report of the previous day’s proceedings at Clerkenwell Police Court continued with the evidence given by the Sommers’ servant girl, Rachel Mount (also spelled Mont or Munt). She was the one, you’ll remember, who’d told the police about the suspected murder.

The reporter seemed quite taken with her, calling her “a most interesting little girl, about 14 years of age, who gave her evidence in the most clear and artless manner”.

Rachel told the court that on Saturday her mistress (Celestina Sommer) had gone out, telling her to go to bed (in the kitchen, where, like many servants in those days, she slept). Rachel didn’t obey, but sat up “making an apron”, but when she heard Celestina come in she put out the candle and hurried into bed.

“I heard my mistress come into the passage, and she had a female with her.” How did she know this? The sound of the shoes? Rachel pretended to be asleep. After going upstairs, Celestina Sommer went into the kitchen and drew the blind at the window down. The report continues:

Does anyone else think that’s odd? Who would want to cut her throat, and why? But back to the story, and I warn you, this is where it gets grisly: 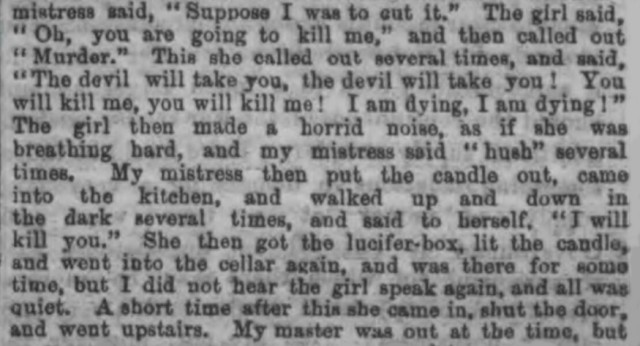 Not surprisingly, Rachel didn’t sleep that night. She heard Charles Sommer coming in at one in the morning (where’d he been? That’s quite late). Rachel then said that her mistress had changed her clothes after coming home:

Bizarre behaviour, waking the supposedly sleeping servant and talking about wages. Perhaps she was checking whether the girl was acting in a way that might suggest she’d heard something. Was Celestina in some kind of shock? Or is this a further example of her mental instability?

Rachel then answered a question from the magistrate, William Corrie:

She also said that she’d seen the murdered child once before:

Weird and scary stuff. And puzzling. It’s possible that the box with three clasps – very secure – had been holding money to pay my 3x great grandmother, Julia Harrington, for little Celestina’s keep. Maybe Rachel hadn’t seen the older Celestina take it when she and the child went out.

But she saw the large stone wrapped in a cloth. Very sinister. And how did Rachel know that it was a stone inside the material?

Was Celestina Sommer planning to kill her daughter on that earlier occasion? Is that what Rachel is implying?

I must admit I find this entire story as confusing as it is horrific. Why would little Celestina say that someone wanted to cut her throat? And why would her mother then threaten to do it? What made Celestina Sommer go back into the kitchen and walk around, talking to herself? That was risky behaviour.

And the two big questions: where was the knife she used to cut her daughter’s throat? Rachel didn’t mention it, though her evidence was full of other details, like the box with three clasps and the Lucifers (matches).

And why did Celestina Sommer want to kill her anyway? Because the girl had been ‘telling lies’ – but what lies? Remember that we know they were mother and daughter, but Rachel didn’t know this, and nor did the court. So had little Celestina been giving away the secret of her birth?

One thing’s obvious. Celestina Sommer was emotionally unstable. Perhaps, to use Victorian language, she was ‘mad’.

I know I’ve asked a lot of questions here, but I do find it puzzling. Of course, the newspaper report has been edited – I can’t imagine that Rachel, under pressure and perhaps frightened, spoke so eloquently. But even so, it’s a bizarre scenario, as well as a horrible one.

What do you think?

Next time I’ll cover the last part of the newspaper report.

A Rebel Hand is: about Nicholas Delaney, Irish rebel of 1798, transported as a convict to New South Wales, roadbuilder, innkeeper and farmer. My great-great-great grandfather. Other ancestors transported to Australia, like Sarah Marshall, John Simpson and James Thomas Richards, pop up as well. This blog's also about the historical background to their lives, in England, Ireland, and Australia. My respectable Welsh ancestors sometimes get a look in.
View all posts by rebelhand →
This entry was posted in London, Trial and tagged #victorianmurder, Celestina, Celestina Sommer, Christmas, Murder, Victorian murder. Bookmark the permalink.

25 Responses to The murder of Celestina Christmas: a Christmas tale pt 8