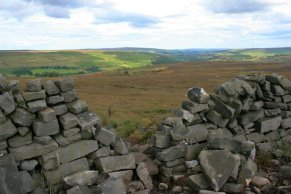 It’s 2014! A fresh new year in which I hope to pull a few more bricks from those genealogy walls as well as finding out more about the historical background to my ancestors’ lives in Australia and the British Isles.

This is the second part of my response to Geniaus’s Accentuate the Positive 2013 geneameme. You can see the first 10 replies here.

And it’s straight into an exciting development in 2013:

11. A genealogy conference/seminar/webinar from which I learnt something new was: when I went to my first Who Do You Think You Are? Live at Olympia in London. The queue to get in snaked round the building and, standing in the cold, I thought: with all these people will I ever get into the workshops I want to? Will it all be endless queueing?

And yes, it is vast, and yes, huge numbers of people go. But I did get to the sessions I’d earmarked (here are this year’s) and learned a lot, especially about Irish, London and Yorkshire research and about records before 1837 – and met some great people.

13. A journal/magazine article I had published was: Hmm, this one’s trickier, because as far as I know it hasn’t been published yet. I wrote James and the Silver Cup, the story of how my 2x great-grandfather, James Thomas Richards, won second prize in a prestigious rowing race at a Sydney regatta in 1853, for a Federation of Family History Societies competition. To my astonishment, I too won second prize.

I won’t go into the details here because I don’t want to make this post too long, but part of my prize – presented at WDYTYA? Live – was having the article published in the My Heritage newsletter. I agreed not to publish it here before then, but so far I haven’t seen it. I must chase them up.

However I did have a short story published this year and it had a historical flavour.

14. I taught a friend how to: think about engaging potential readers of his website by using social media and blogging.

As I’ve learned myself, we can’t just set up a static website and hope that people will stumble upon it. We have to let them know what we’re doing, and then when (we hope) they see something they want to talk to us about, we have to make it easy for them to do that.

And that’s one of the joys of the net these days; how interactive it can be. I love connecting with other people who share my interests. Some have become friends. And it’s a thrill when I comment on something a person I respect has said and they answer. We’re all connected – celebrate it!

15. A genealogy book that taught me something new was: Tracing Your Ancestors Using the Census by Emma Jolly (Pen & Sword, 2013). This comprehensive guide covers the history of censuses in the UK and Ireland, but for me the chapters on each individual census from 1841 to 1911 are genealogy gold.

I’ve only just started reading it and already I know a lot more about the 1841 census and the traps for unwary researchers. I’m hoping Emma’s book will help me untangle the many Griffith Owens I wrote about in my last post and find the thread that leads me to ‘mine’.

16. A great repository/archive/library I visited was: The Guildhall Library, which I mentioned last time. If you’re interested in researching apprentices or City [of London] Livery Companies it’s the place to go.

Most of the Guildhall’s manuscript collection has been moved to the London Metropolitan Archives, but they have a wonderful library of printed books covering all aspects of life in London and hold regular exhibitions highlighting some of their collection. 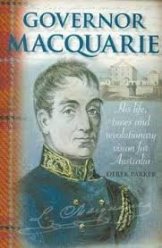 17. A new genealogy/history book I enjoyed was: Governor Macquarie by Derek Parker (Woodslane Press, 2010). Crissouli, a lovely Aussie genealogy pal who is a must-read for Irish family history, especially Co Clare, sent it to me with the exciting news that my ancestor gets a (brief) mention on page 164.

And there it is, the extract from Lachlan Macquarie‘s journal for 13 June 1816 which mentions my 3x great-grandfather, Nicholas Delaney, the inspiration for this blog and my own book, A Rebel Hand. Nicholas, overseer of a road gang building  Mrs Macquarie’s Drive, finished the Governor’s wife’s pet project on her birthday and was well rewarded with rum for his good timing.

I’ve got a soft spot for Macquarie, a man before his time unappreciated by the British authorities and the Australian establishment, and it was a treat to find out more about this intriguing man. Thank you, Chris!

18. It was exciting to finally meet: Chris Paton, whose British GENES blog is a must-read for UK and Irish genealogy. We had a chat and he’s just as clever and amusing as you’d think he’d be. It was a delight to meet Anne Powers, a long-time cyber-friend and author of A Parcel of Ribbons, the Jamaican genealogy blog and book.

I also had chats with Rebecca Probert, the oracle for marriage law, and Beryl Evans of the National Library of Wales, both of whom were helpful, friendly people. I hope to meet some more bloggers and professionals this year.

19. A geneadventure I enjoyed was: Who Do You Think You Are? Live must qualify as my biggest adventure this year, though sleuthing for my 3x great-grandmother’s house in Hackney (see my last post) comes a close second.

20. Another positive I would like to share is: the huge surprise and great honour of A Rebel Hand being named one of ‘the 50 genealogy blogs you need to read’ in Inside History’s second Annual Genealogy Blog Awards. Anyone interested in Australian and New Zealand history and genealogy will know this excellent magazine and to be recognised by them alongside some of my geneablogging hero(in)es was stunning. Thank you, Cassie and Jill.

Well, looking back over 2013 it wasn’t a bad year, genealogy-wise anyway. Thanks again to GeniAus for the inspiration and for the happy memories writing this has brought back.

A Rebel Hand is: about Nicholas Delaney, Irish rebel of 1798, transported as a convict to New South Wales, roadbuilder, innkeeper and farmer. My great-great-great grandfather. Other ancestors transported to Australia, like Sarah Marshall, John Simpson and James Thomas Richards, pop up as well. This blog's also about the historical background to their lives, in England, Ireland, and Australia. My respectable Welsh ancestors sometimes get a look in.
View all posts by rebelhand →
This entry was posted in Australia, Genealogy, Ireland, London and tagged Beryl Evans, census, Derek Parker, family history, genealogy, Guildhall Library, James Thomas Richards, Lachlan Macquarie, libraries, My Heritage, Rebecca Probert, United Kingdom Census 1841, wdytya, Who Do You Think You Are. Bookmark the permalink.

6 Responses to Accentuate the Positive 2013 – continued