Thanks to Geniaus for this image

It’s 2013 at last! I can’t deny that (except on the genealogy front) 2012 was a rubbish year. So I was delighted to see Geniaus suggesting a new geneameme: Accentuate the Positive 2012. What better way to start the new year?

1.  An elusive ancestor I found was Griffith Owen or Owens, my great-grandfather. The family story was that his son, my grandfather, was from Anglesey, but it was Griffith who was born there. I finally tracked him down, via several howlingly bad census transcriptions (1901 and 1911), to Llanfaethlu, a dot on the map of that island. (See no 4) 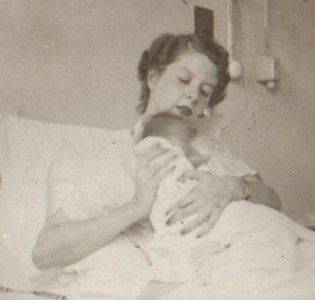 2.  A precious family photo I found was… Since my mother’s death I’ve had a look through some of the family photos she kept. The most precious to me is the ones my dad took of mum and me just after I was born and the ones from our first Christmas as a family. I’m planning to post some more of these in the next few days.

3.  An ancestor’s grave I found was Lucy Simpson’s. I didn’t see it myself, because it’s in the old family graveyard at Moyne Farm, but my generous cousin Wayne Morris sent me a recent photo of what remains of it. The headstone appears to have broken in two in the past few years.

Lucy was the first child of my 3x great grandparents, Sarah Marshall and John Simpson, both convicts. Thank you, Wayne!

4.  An important vital record I found was the 1891 census record of my grandfather Richard aged 9, which gave me the names of his parents. It also showed that he was not born on Anglesey after all. It was his father Griffith who came from that beautiful island. Now where on earth, or Anglesey, was ‘Llanfentlily’ (1901 census) or ‘Llanfenthty’ (1911)? Time for a spot of palaeography and a map. (See no 1)

5.  A newly found family member who shared… who to choose from? The joy of social media is that cousins and their family members have been getting in touch this year and it’s always a joy to make contact and read about their stories if they want to share them. Thank you to Marty, Michael, Karen, Betty, Jim, Trina, Sharron, Gary, Dan, Therese, Wayne, Sandra, Michelle, Ken, Julie and Lee. And anyone I’ve missed because I didn’t know you were a rellie.

6.  A geneasurprise I received was finding out that my 3x great-grandfather, Nicholas Delaney, had probably been murdered. Since he was the one who started me on my interest in genealogy, it was a sad moment.

But being positive, it was a big discovery, and I was able to share it with my mum. And I blogged about it, adding to the information already out there in our book about Nicholas, A Rebel Hand: Nicholas Delaney of 1798. Yay for geneablogging! And thanks to Amy from Branches Leaves & Pollen, who started the Trove Tuesday meme.

7.   My 2012 blog post that I was particularly proud of was Back to Blog – death and renewal, because that was the post which got me back to blogging after my mother’s death. It’s positive because I got back in touch with my genea-pals after some weeks of silence and you were so kind and sent me such lovely messages. Thank you. The genealogy community can be wonderful. 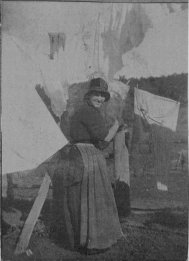 8.   My 2012 blog post that received a large number of hits or comments was What did Mary do on Monday? Women’s work, inspired by Cassmob’s Family History Across the Seas Women’s History Month post in March. The idea was to honour a woman from our family tree by starting with a photograph and telling its story.

I chose Mary Maude Delaney, nee Wilson, my kindly great-grandmother, in an unusual, informal, photo of her, smiling while hanging out the washing. I wrote about washday in the times when everything was done by hand, a hated job. I learned a lot about the back-breaking business of doing the laundry while researching that post.

9.  A new piece of software I mastered was Evernote. I can’t pretend I’ve really mastered it, but I’m learning, and I use it all the time. I don’t know how I did without it (well, I do, I used lots of different files, folders, clipping programs…). I think it was Geniaus who alerted me to it, and I was hooked from the start.

10. A social media tool I enjoyed using for genealogy was Twitter. Now 2012 was the year of Google+, and it is excellent for genealogy, but I confess I have more fun on Twitter. It’s also a great news feed, and alerts me to posts I might otherwise have missed.

The original geneameme has 20 positive points and so far I’ve written about the first 10. Because this is already a long post I’ll come back to the rest of them next time. Watch this space for more positivity…

And here it is!

A Rebel Hand is: about Nicholas Delaney, Irish rebel of 1798, transported as a convict to New South Wales, roadbuilder, innkeeper and farmer. My great-great-great grandfather. Other ancestors transported to Australia, like Sarah Marshall, John Simpson and James Thomas Richards, pop up as well. This blog's also about the historical background to their lives, in England, Ireland, and Australia. My respectable Welsh ancestors sometimes get a look in.
View all posts by rebelhand →
This entry was posted in A Rebel Hand, Blogging, Genealogy, Nicholas Delaney and tagged 2012, Anglesey, Blogging, family history, genealogy, geneameme, Mary Maude Wilson, Moyne, New Year, Nicholas Delaney, Sarah Marshall. Bookmark the permalink.