Nicholas Delaney is something of a hero to me and many of his other descendants. An Irish rebel in 1798, he escaped being hung and built a new life for himself and his family in early colonial New South Wales. So it was a shock to find out that his death was tragic – possibly murdered and robbed by a man he knew.

I was idly browsing Trove, the wonderful (and free!) digital treasury of Australian newpapers, publications, pictures and more, when I came across this –

The search result that started it all

Then I looked again at the date. ‘2nd September’, it said, and the newspaper, the Sydney Monitor, was dated 1834. That was they day before he died. This was getting worse. Was I reading about my own great-great-great grandfather’s murder?

I clicked on the article. “SUPREME COURT. – CRIMINAL SIDE.  SATURDAY, NOVEMBER 15. – Before Mr. JUSTICE BURTON and a Jury of Inhabitants,” it started. 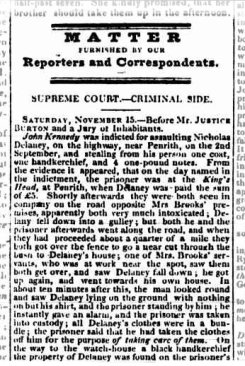 “John Kennedy was indicted for assaulting Nicholas Delaney, on the highway, near Penrith, on the 2nd September, and stealing from his person one coat, one handkerchief, and 4 one-pound notes. From the evidence it appeared, that on the day named in the indictment, the prisoner was at the King’s Head, at Penrith, when Delaney was paid the sum of £5. Shortly afterwards they were both seen in company on the road opposite Mrs Brooks’ premises, apparently both very much intoxicated…”

Nicholas fell “into a gulley” but the two staggered on for a quarter of a mile till they took a short cut towards his house, with Nicholas falling over again.

So far so almost comic. But, 10 minutes later, one of Mrs. Brooks’ servants, who was giving evidence, “saw Delaney lying on the ground with nothing on but his shirt, and the prisoner standing by him”.

The man raised the alarm and Kennedy was arrested. Nicholas’s clothes were in a bundle and Kennedy claimed that “he had taken the clothes off him for the purpose of taking care of them.” How kind, you might think, but why was he nearly naked in the first place? Mr Justice Burton didn’t seem to think it was odd, though.

Someone must have got Nicholas into his clothes again, though he “was unable to speak, and was removed to one of Mrs. Brooks’ huts, where he was put to bed, and slept for some hours”.

Meanwhile Kennedy was searched on his way to the watch-house, where suspected criminals were imprisoned, and a black handkerchief belonging to Nicholas was found on him, “but he told the constable that Delaney had stripped to fight him.” That would be a plausible excuse for his having the clothes, but why was the handkerchief in his pocket and not with them?

This was, of course, proof of theft. And, odd as it seems to us now, handkerchiefs were highly prized by thieves in the 19th century and before. Easy to hide, easy to sell, and fetching a good price, they were the favourites of Charles Dickens’ Artful Dodger. 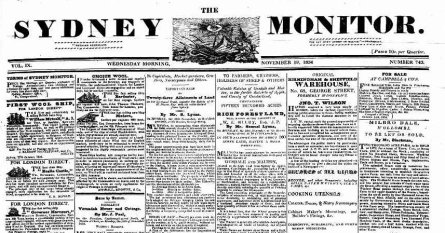 So far, this has just been a story of drunkenness and an attempted robbery. But it gets far worse. “When [Nicholas] got up he missed the handkerchief out of his pocket…” so it was stolen, not given to Kennedy.

The report goes on: “He appeared nearly sober, and started for the purpose of going home, but was found the next morning lying dead about a quarter of a mile from his own house.”

So… how and why did Nicholas die? I’ll finish the story in my next post. (Sorry! But otherwise it would be just too long.) But I’m thinking I should put that black handkerchief on my head and pronounce sentence on John Kennedy.

I’d planned to write this post to coincide with the anniversary of Nicholas’s death, but my own mother’s death meant that life has become a bit hectic and unpredictable. So I’m extra grateful to Amy from Branches Leaves & Pollen for coming up with the idea of Trove Tuesday posts, which celebrate the wonderful resource for genealogists and historians of Australia provided free by the National Library‘s online resource, Trove. It’s been a real incentive to get on with blogging again.

A Rebel Hand is: about Nicholas Delaney, Irish rebel of 1798, transported as a convict to New South Wales, roadbuilder, innkeeper and farmer. My great-great-great grandfather. Other ancestors transported to Australia, like Sarah Marshall, John Simpson and James Thomas Richards, pop up as well. This blog's also about the historical background to their lives, in England, Ireland, and Australia. My respectable Welsh ancestors sometimes get a look in.
View all posts by rebelhand →
This entry was posted in Nicholas Delaney and tagged Delaney, John Kennedy, Justice Burton, Murder, Nicholas Delaney, Penrith, Sydney Monitor, Trove Tuesday. Bookmark the permalink.

20 Responses to How did Nicholas Delaney die? A murder mystery (Trove Tuesday post)