What did Mary do on Monday? Women’s work 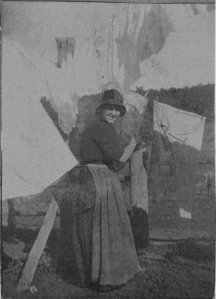 Mary doing the washing at Moyne

I love this picture of my great grandmother, Mary Maude Delaney (nee Wilson). In all the other family photos, she is posed, poised and very formal, a respectable Victorian matron. But in this one, she’s turning round to smile as she pegs out the washing. Her whole face lights up and I can understand her great-nephew, Hartley Hollier, remembering her as very loving – if a bit too fond of hugging and kissing the young lad when he visited.

I’ve decided to concentrate on the women in the family for my posts this March, which is Women’s History Month. It’s not as easy as writing about the men. There is less on the record about them. Some seem to have no story before they arrive in New South Wales, like Elizabeth Bayly (or Bayley, or Bailey), Nicholas Delaney’s wife. Or else they are ‘just’ wives and mothers and don’t do anything that gets reported in the papers, or follow an interesting career.

Women like Mary just got on with life, making the best of their marriage, cooking, cleaning and having and bringing up children. For a Delaney wife, Mary had a smallish number of babies – five that we know about – and three survived to adulthood. She also looked after the paying guests who stayed to enjoy the ‘splendid accommodation’ and ‘good shooting’ her husband Tom’s advertisements promised.

Splendid accommodation! Moyne Farm, their home, was a fairly typical early nineteenth-century farmhouse, with outbuildings to house members of the family as it grew (I’m guessing that the guests got proper bedrooms) as well as the kitchen and other utilities.

Moyne is also quite special historically, having been built by John Grant (‘the Father of Hartley’) but I’ll talk about that in another post.

So back to Mary, hanging out the washing. Sheets, cloths, workwear, underwear, all the family linen. A modern family loads up the washing machine often enough – but she would have done the entire wash by hand.

Here’s an idea of what doing the laundry would have been like for a woman living on a farm in Australia between 1875, when Mary married Tom, and 1917, when they moved to Randwick, a suburb south-east of Sydney.

Scrubbing board and tub (barkingside21.blogspot.co.uk under creative commons)

“Wash on Monday” is the old saying, and Monday was washday in many Australian homes, perhaps so that everything was clean and dry for Sunday and church.

Some may have had a wash house in an outbuilding, but a lot of women did their laundry – hot, heavy, sweaty work – out of doors in the ‘workplace, the area by the back door that houses toilet, wood pile, and bench or lean-to with wash tubs and buckets’, as historian Kimberley Webber describes it.

Washday began very early in the morning – they would need every hour of daylight to finish the work. Water would have to be fetched, poured into large pots or, if they had one, a copper, and heated. An iron pot was less ideal for clothes washing as it could leave rust stains on the otherwise clean clothes.

Stains would be dealt with by soaking, perhaps in lye (caustic soda, made from water and wood ash, which could cause nasty burns) and spot-cleaning. Ideally, soiled white linens would be boiled in a copper but if this was not possible, they would be washed like the rest of the laundry, in a wooden or cement tub or perhaps a high-sided metal dolly tub.

Soap, bought or home made from fat and lye, would be rubbed onto dirty areas or shaved into soap flakes and dissolved in clean, hot water. Then came the hardest part of the work. I’ve washed sheets by hand and it is back-breaking, time-consuming and scrubs your hands raw. Better to use a wooden implement to take the strain and do the heavy jobs of mixing, agitating and knocking out the dirt.

Some women may still have been using a long, stout stick or bats, beetles or paddles but I hope Mary had the more modern gadgets, a posser or plunger (like an inverted cone at the end of a stick) or a dolly, which looked like a doll’s stool, again on the end of a stick with a handle. A dolly could plunge up and down or agitate round and round – do you remember the old top-loading washing machines which did that?

The there was a fairly new piece of washday equipment, the scrubbing board or washboard, with its horizontal ridges they could scrub the laundry up and down on. Later boards had metal or glass ridges but the early ones were all wood.

More muscle-power was needed to wring the dirty water out of the now heavy wet clothes. First the linen needed to be pulled out of the water with a stick or tongs. It could then be wound round a thick post or wrung by twisting, perhaps round a stick at one end – you’d need extra hands to do this. Then heat more water, rinse and repeat.

If Mary was lucky she’d have had a mangle, with two rollers you feed the wet cloth between. It would squeeze most of the water out, though you might have to feed things through more than once and trapped fingers were always a danger.

To keep whites looking fresh, a blue bag could be added to the final rinse – the bluish tinge would cancel out any grey or yellowish tones. The same method has been used by women to brighten up their white hair, giving them the (not always complimentary) name of the blue rinse brigade. The strong Australian sun also helped by bleaching the washed whites as they dried.

Even now the job might not be quite finished, as many women went on to starch some white cotton garments and household linens to keep them looking smart and help them resist dirt.

No wonder Kimberley Webber described washing as ‘the most hated task’ women had to do (p86).

At the end of a long and exhausting day it was time to peg out the washing on the line and make a quick evening meal of cold leftovers from Sunday dinner as there was no time to prepare food on washday and the fire would have been needed to heat water.

In the nineteenth century, respectability was determined by the cleanliness of your linen, such as shirts, chemises, collars and cuffs. It’s only in our modern world of washing machines and artificial fibres that outer clothes tend to be washed frequently. In past centuries they would have been brushed to remove loose dirt and spot-cleaned. At least Mary would have been spared washing all that extra heavy cotton and wool and the yards of skirt she and the other women wore.

I’m just about to put a load of clothes into the washing machine, including some really grubby jeans. The wash will take less than an hour. I remember mangling jeans and it’s not easy work. Today I’m really grateful that this ‘universally loathed’ (Webber, p99) job is so easy and quick.

This post was inspired by Cassmob’s Family History Across the Seas. Her Carnival of Genealogy post was in turn inspired by Jasia at Creative Gene. The challenge was to honour a woman from our family tree by starting with a photograph and telling the story of the photo and/or a biography of the woman pictured.

Newsflash – here are the Carnival of Genealogy posts with an introduction by Jasia. A fascinating read.

Webber, Kimberley: Embracing the New: A Tale of Two Rooms in Troy, Patrick Nicol (ed): A History of European Housing in Australia (CUP 2000)

Back in the Day in Not Yet Published

Laundry in the 19th Century PDF by Gaeta Bell

Monday Washdays in Join me in the 1900s

Washday in UKHomefront’s Washing Through the Ages

Just out: To the Tubs: Laundry as Female Punishment from The Female Convicts Research Centre Inc’s 2012 seminar, The Working Lives of Convict Women

A Rebel Hand is: about Nicholas Delaney, Irish rebel of 1798, transported as a convict to New South Wales, roadbuilder, innkeeper and farmer. My great-great-great grandfather. Other ancestors transported to Australia, like Sarah Marshall, John Simpson and James Thomas Richards, pop up as well. This blog's also about the historical background to their lives, in England, Ireland, and Australia. My respectable Welsh ancestors sometimes get a look in.
View all posts by rebelhand →
This entry was posted in Australia, Genealogy and tagged Carnival of Genealogy, Hartley Hollier, laundry, Mary Maude Wilson, Moyne, Moyne farm, Sylvia Hollier, Thomas Delaney, washday, Women's History Month. Bookmark the permalink.

17 Responses to What did Mary do on Monday? Women’s work